Our client, CSL Behring, asked us for an innovative way for their researchers to reach out to their patients. We responded in a way that payed homage to their history while providing researchers and children a fun way to interact.

CSL Behring had produced a new therapy for Juvenile Hemophilia that was better able to target deficiencies, while reducing side affects in the patient. They came to us for a unique and innovative way to interact with their patients. The researchers needed a way to collect data in a way that would be fun for the children. The ultimate goal was to deliver a high touch moment and collect first hand data directly from the end users.

They already had an idea of what they wanted and we were asked to create an interactive voyage narrative. The purpose of the voyage being to engage in the urgent battle to destroy hemophilia and capture the treasure of being able to live a healthy life.

Over a century ago, in 1901, Emil Von Berhing received the first Nobel Prize in Physiology and Medicine for his work on serum therapies. His work led to the discovery of the Diptheria serum and thereafter his work saved thousands of children. CSL Behring could trace their lineage directly to this great man, and since both his work and the current therapy focused on children we chose to pay homage to him in our design.

We paid tribute to Emil Behring’s military service by designing their booth with a historic nautical theme. Then to make it more child friendly we decided to add a whimsical pirate theme to the setting. Absolute Event Experience then customized a six player water race game to aid us in the storytelling journey. We incorporated faces of the project team leadership into the game to create familiarity. At the end of the game children were given medallions which could be redeemed for prizes. The prizes were collected in a quiet room that allowed the research team to interview the parents while the child was engaged with their new prize.

The CSL Behring team leadership also took turns manning the game, engaging in photo ops and taking the opportunity to speak with the parents regarding the effectiveness of the therapy. This gave each member of the team the opportunity to directly interact with the children and collect the data first hand. 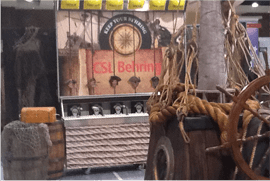