Everyone goes to Vegas to take. But Chrysler wanted the chance to do something different at their Vegas event — they wanted to give something back to the community. A gift that would demonstrate the core competencies of the company: honesty, integrity, and value. At this exciting company event, the Absolute team put together a scavenger hunt where Chrysler employees had to search for pieces of a children’s bicycle and eventually put together a complete bike that was fit to ride. The hunt started out as a competition, but team members soon realized that they didn’t have all the right parts for a bike and had to trade with other teams to get the right pieces— making it a huge collaborative effort to build the bicycles. A representative of Toys R Us officially inspected the bikes to ensure they were safe.

There were 82 teams involved in this massive hunt at the famous Mandalay Bay Hotel & Casino. After the bikes were built, employees went back for what they thought was their final wrap up session where they were going to announce the winning team. They were in for a big surprise. There they announced that the bikes were being donated to underprivileged kids at the Andre Agassi School and that the company was donating a bike to every kid at the school. From there, the doors opened and kids from the school came in riding the bikes in a grand parade. The winning team was Chrysler for leaving behind a legacy the children at the Andre Agassi School won’t soon forget.

“Wow, I can’t thank the team at Absolute Event Experience enough. We knew that doing a legacy event was going to be meaningful but we did not think that it would have that type of an effect on our organization. The event went beyond our wildest expectations.” 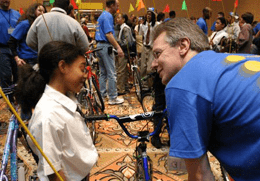